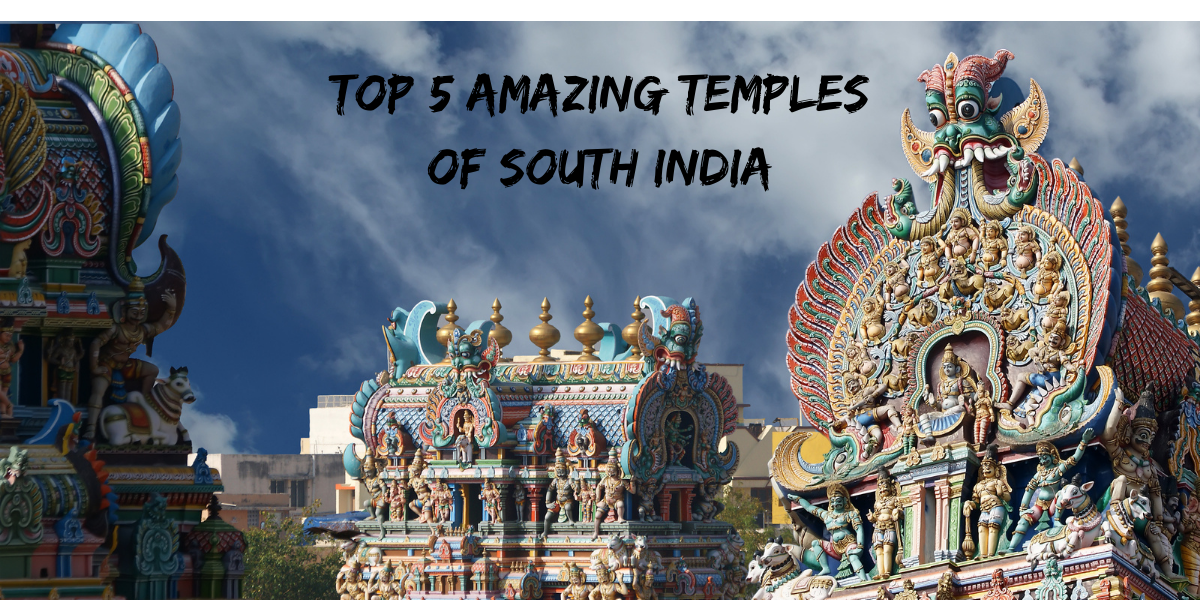 The southern part of our subcontinent India has ample of things to see and even more things to be mesmerized about. Dravidian architecture has always attracted people from various parts of the world due to their precise and sharp sculpting. The temples in South India are the ovation of Dravidian architecture to Indian history. These buildings and monuments are very different from the ones in North India (Nagara temples). These temples are spread across acres of land and are also decorated with the help of stone carvings and marble work which is the most amazing form of art form to look out for. 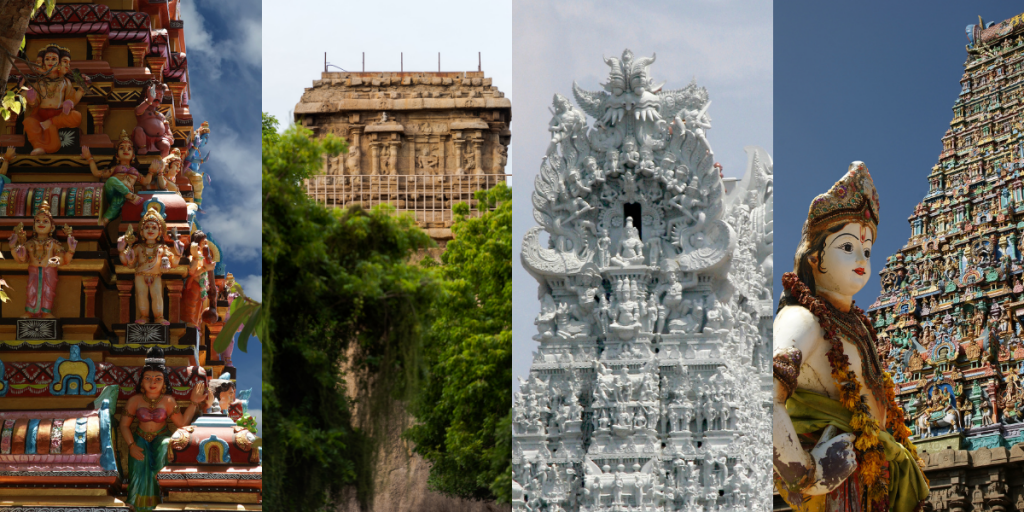 Though every temple in South India is a work of art, be it the ones we casually pass on our way to work in Bangalore or the marvelous ones hidden away in other corners of Southern India. If you want to explore the best of architecture, culture and spirituality, then visiting these top 5 temples of South India will quench your thirst for ancient beauties. Some might already be known to you because of their international popularity and some might come as a pleasant surprise. They are all within the distance of a weekend trip from Bangalore, so read on and plan your next trip to Dravidian history asap with Deepam Taxi!

Here are 5 innate examples of Dravidian architecture of temples in south India.

The Meenakshi Amman temple is not just an ode to the rich ancient history of India but also an experience in itself. This beautiful temple is famous all over the world for its architecture and festivity. If you are lucky then visit the temple in April to enjoy the two 12 days long Chithirai Festival. This festival marks the wedding of the Lord Sundareswarar (Lord Shiva) and Goddess Meenakshi (Lord Vishnu’s sister). 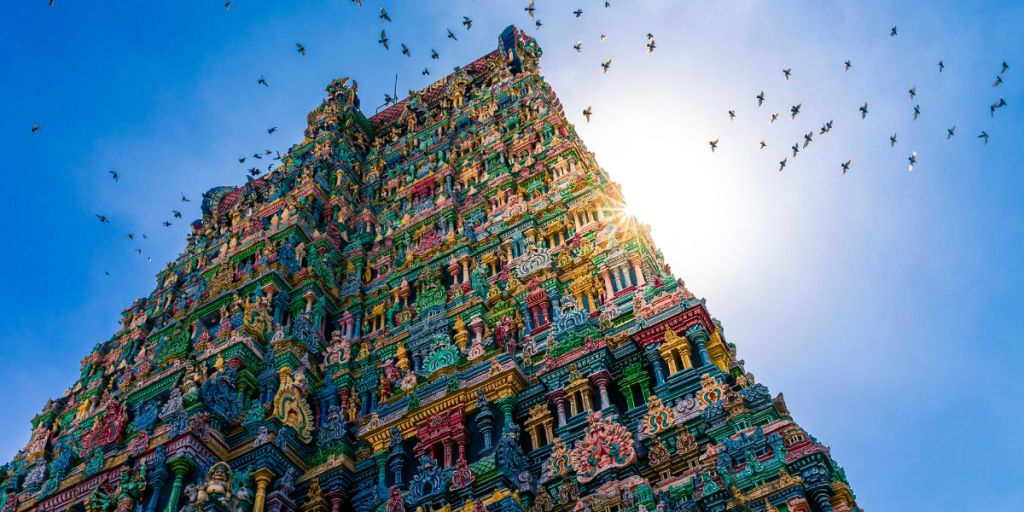 The massive temple is spread across 15 acres, and has 4,500 pillars and 12 towers. During the celestial wedding festival it feels like you is actually attending a big fat Indian wedding with a number of extravagant rituals and ceremonies. The temple is one of the most important ones in Tamil Nadu as well as India. So if you are visiting just one temple in South India, then it should be it. It would be the best if you visit Madurai and enjoy the festivities in April

Sri Ranganathaswami Temple is one of the largest Hindu functioning temples and is widely spread across 155 acres within a perimeter of 4 km. The temple has the largest Gopuram i.e the temple tower. This temple is devoted to Lord Ranganatha that is Lord Vishnu in a reclining pose. The temple designed in the Dravidian style has the scriptures and carvings of 108 Hindu deities, all different avatars of Lord Vishnu. The temple is also known by other names such as Thiruvaranga Tirupati, Periyakoil, Bhoologa Vaikundam and Bhogamandabam. One of the most mesmerizing fact about the temple is it is designed in bright and beautiful colours 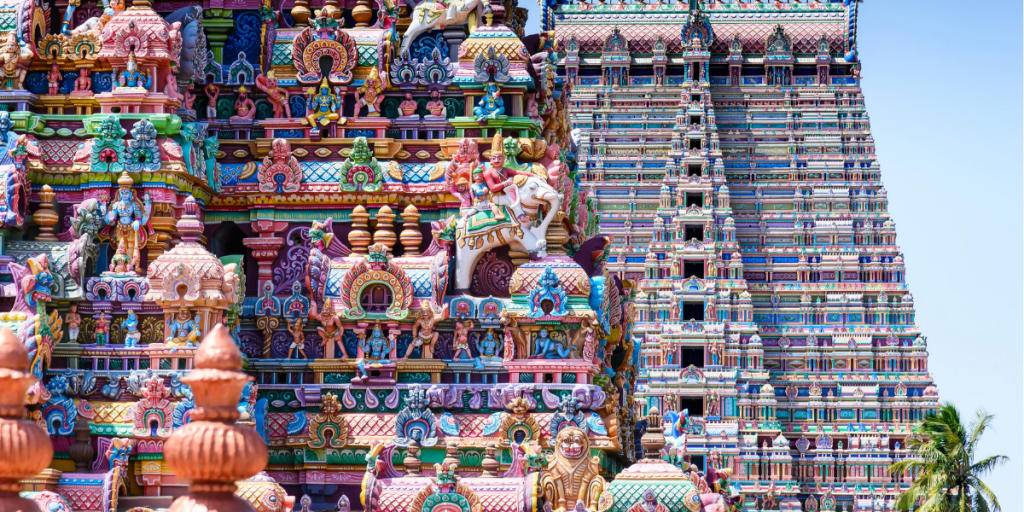 The temple has hues of blue, pink and other pastels which make the temple look like and feel more alive. The temple is known for the various inscriptions in different Indian languages providing an insight into the religious and cultural references of the medieval era and the Hindu religion.  Temple complex also houses several chariots namely Garuda vahana, Simha vahana, Hanumantha vahana, and Sesha vahan which deserve special mention as they are used during festivals and various religious occasions. Visiting the largest functioning temple and the most colourful one to offer your prayers as well as take in a dose of history must be on your list this year!

This beautiful temple is located at the tip of the Indian peninsula, Rameshwaram which holds a huge importance in Indian Mythology. The temple is located only at a distance of 100 meters from the sea and it is a custom to first take a bath in the sea before entering the temple and then again taking bath in its 22 wells. This custom too plays a key role in Indian mythology where it is believed to wash away your sins and bad karma and purify your soul once you bathe in the holy waters of the temple. This temple too is one of the most worshiped in South India and is a work of art dating back centuries.

This temple has the longest pillared hallway which is said to be longest in India. The hallway is dotted with the sculptures and stone carvings of different forms of Lord Vishnu, Lord Shiva and other Hindu gods and goddesses. 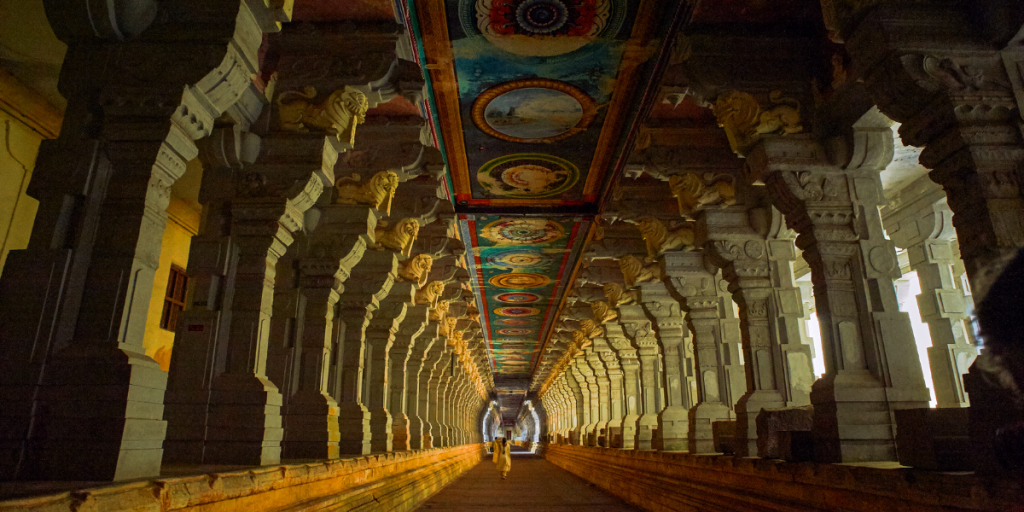 The temple is said to be located where Ram built a bridge to cross the ocean with the help of Hanuman and his army to reach Sri Lanka. Rameshwaram apart from being at the edge of India and located on the blue waters of the Arabian sea, holds a special place in the hearts of its tourist due to its history and mythology. Thus, taking a temple tour across South India would be incomplete without visiting the most important one at the end of the Indian subcontinent.

The Tirupati Temple is one of the most famous temples in india and worldwide for its wealth and the long line of devoted pilgrims. The temple is dedicated to Lord Venkateshwara, an avatar of Lord Vishnu and it is believed that praying with your heart and soul at the temple fulfills your prayers. This belief has led to the richest pilgrims in India to the not so rich ones to offer their prayers and hefty amounts of donations to the temple including Gold. The architecture of the temple is rather simple but classic with its gold plated Dome.

The temple is located at the top of a hill and the shining glory of the temple which is its golden Dome can be seen from down the hills. It is a beautiful and mesmerizing experience in itself to watch the sunrise or sunset over the temple and its golden aura. 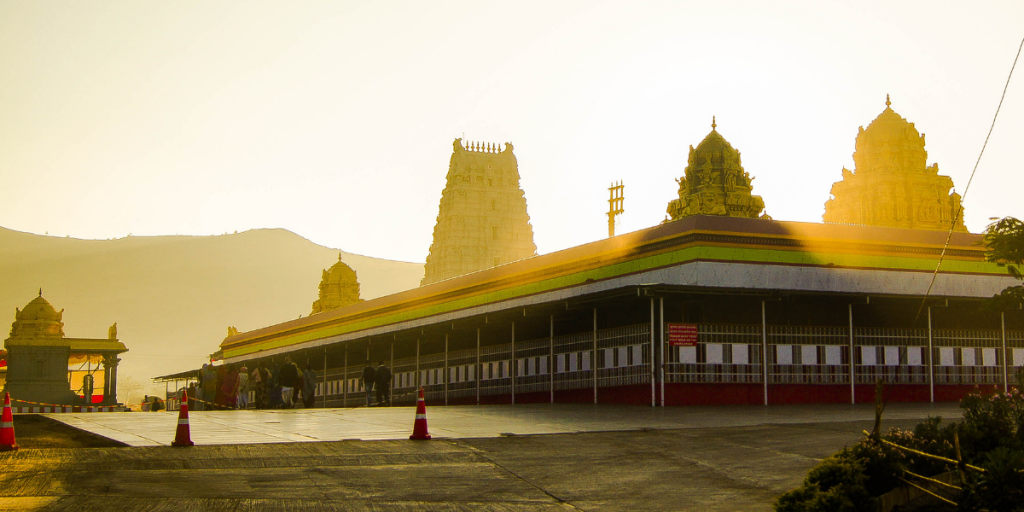 The Tirupati temple has gone through many invasions by Mughal Rulers and other kings from different countries which wanted to rob the temple of its wealth. The temple witnesses an immense crowd because of the strong beliefs related to the temple and this makes it very hard for non pilgrims to visit. So while visiting Tirupati Temple, be assured that you will have to make your way through the crowd and thus visiting it one a colder day would be a good option. It’s a 2-4 hour climb uphill to visit the temple but if you want you can even go by a bus from down the hills. Reaching Tirupati Temple is not going to be problem from Bangalore as it is an 8 hours drive which is going to be extremely comfortable with Deepam Taxi.

The Pattadakal Monuments are an UNESCO world heritage site due to their ancient architecture and history. The Pattadakal group of monuments comprises of many sights which are a treat to architecture and history buffs. The beautiful stone carvings on the sandstones to the sculptures carefully crafted, it is an eye warming sight. But the most famous of all the monuments is the Virupaksha Temple. The temple not only holds a religious value but is one of the most beautifully designed and constructed temples in South India.

The ruling kings of the era when the temple was constructed were the Chalukya dynasty, rulers of Vijayanagar one of the wealthiest and culturally rich in Indian History. The ruins of Hampi are an ode to them which has now been preserved and protected by UNESCO. The temples stand out different from others in South India because these temples are not solely based on the Dravidian Architecture. 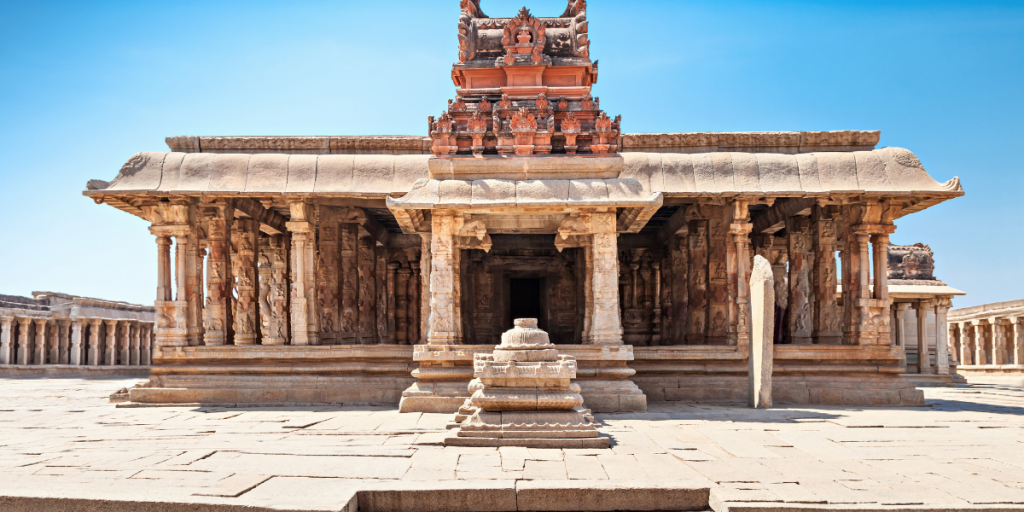 The group of monuments has 9 temples which belong to different forms of religious such as Jain, Hindu and such. The temples also are made according to Nagara as well as Dravidian architecture. The rulers of Vijayanagar at that time were highly inclined towards architecture and culture and thus they made sure that the monuments be a blend of all religions and culture. Their progressive thinking and the talented hands of architects and designers of ancient India is what Virupaksha Temple today stands for.

Take a trip down ancient history and architecture in South India!

South India has so much to offer to travelers as well as pilgrims that all of it cannot be contained in one trip down South. Thus, if you want to treat your eyes to the architecture and design of the famous ancient Dravidian style as well as feed your hunger for ancient history and religion, then visiting these 5 temples to start with will be the best. These temples are not only famous in India but tourists from across the world visit them to indulge in the Indian culture and experience the remains of the golden bird that India once was.

Travelling from Bangalore to this entire place is not at all a hustle and even though some of these can be covered in a weekend, it would also be good to take a short trip to visit all of these. The experience that you will carry home along with the blessings of the different gods and goddesses worshipped at these temples is priceless. But if affordability is one of your constraints, traveling Deepam Taxi will make your trip affordable and smooth at the same time.